“The word of the Lord came to me: I chose you before I formed you in the womb; I set you apart before you were born. I appointed you a prophet to the nations. But I protested, “Oh no, Lord, God! Look, I don’t know how to speak since I am [only] a youth.” Then the Lord said to me: Do not say, “I am [only] a youth,” for you will go to everyone I send you to and speak whatever I tell you. Do not be afraid of anyone, for I will be with you to deliver you. [This is] the Lord’s declaration. Then the Lord reached out His hand, touched my mouth, and told me: I have now filled your mouth with My words.” -Jeremiah 1:4-9

God doesn’t call the equipped, He equips the called.

This has been a reoccurring theme in my life the past year and today as we were introduced to Memphis.

This morning started with an awesome worship service led by Alex and a devotional led by John, two of the guys on the trip. It couldn’t have been more appropriate. The Spirit was moving as we made a joyful noise and talked about the ministry of Jeremiah. In 42 years he encountered pretty much everything you could imagine. Although no one responded to his ministry, it wasn’t an accident. Despite his youth and feelings of inadequacy Jeremiah happily served our awesome God.

Mark followed the devotion with his testimony – it was awesome! It’s so amazing to see how God writes each of our love stories and that each is absolutely perfect.

Our next stop was at Fellowship Downtown. The message was on Jesus’ transfiguration in Matthew 17:1-13. The message was absolutely incredible. What stood out the most was that Christ’s transfiguration must lead to our transformation. If you’ve accepted Christ and nothing about your life has changed, something’s wrong. Talk about powerful words that call for a gut check!

And of course there was a tie in to God calling the weak and unequipped. History is proof of that. God’s used murderers, youth, and prostitutes to show his strength in those who are weak. His majesty is manifested in our weakness. He uses our brokenness as a platform to show His glory.

Next our day included a talk on Jesus calling his disciples. During Christ’s time, becoming a Rabbi was the highest honor that all Jewish men ultimately desired. Those who didn’t make the “cut” for Rabbi school were sent home to learn their families craft. Here’s where it gets super awesome – when Christ called Peter and Andrew to follow him, they’d already been sent home. They didn’t make the cut, but Christ changed the game. He said they were worthy to spread the Gospel and that’s exactly what they did. Absolutely incredible.

Still having doubts about God’s ability to use you? Cast them aside, they’re lies from the enemy. God calls you where you’re at. All you have to do is say “YES”! Nothing God does is an accident. He’s ordained you to be exactly where you are to serve as His hands and feet.

After spending time at the Civil Rights Museum, playing a little Wah and Ninja outside the church, eating an amazing dinner homemade by our team, learning how to play signs and recounting how our lives have been impacted today, you’d think we’d call it a night – WRONGO! Worshipping again and loving it! 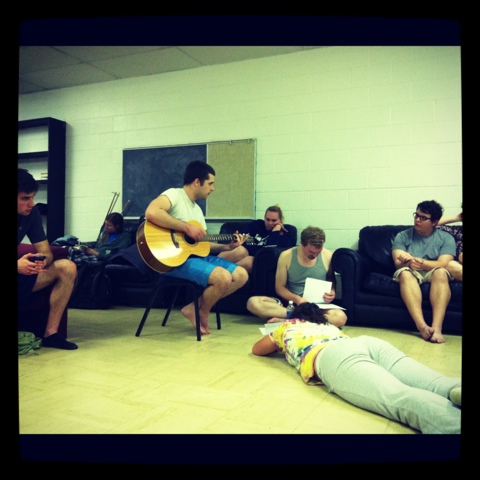